Newport, Rhode Island USA – Thousands of miles and 10 months of lead time are proving no deterrent for teams intent on ensuring their spot in one of the most anticipated sailing championships of 2020. In the few short weeks since entries opened, nearly 30 entries have registered for the 2020 ORC/IRC World Championships, exceeding organizers’ expectations and laying a strong foundation for the regatta’s triumphant return to the United States after a two-decade absence.

Among the teams making an early commitment to travel to the regatta is the J/122 Teamwork crew, led by Robin Team from North Carolina, USA. “We are very excited to have the opportunity to sail in the ORC/IRC World Championships at the New York Yacht Club,” said Team. “It is a chance to race against the very best competition in a world-class venue run by the NYYC. They always run a great regatta, both on the water and shoreside.”

The 2020 ORC/IRC World Championship will bring top sailing teams from around the globe to battle on Rhode Island Sound and Narragansett Bay for one of three coveted world titles. The regatta will be scored using a combination of the two most popular rating rules in the sport, ORC and IRC, and racing will be a mix of around-the-buoys racing and longer, offshore courses. The competition will be held at the New York Yacht Club Harbour Court from September 25 to October 3, 2020.

While the Teamwork crew will put in a fair number of miles to get its J/122 to Newport, there are many other crews that are committing to an even longer journey. Among the 28 entries to date are two each from Italy and Great Britain and one each from Germany, France and Canada. This geographic spread is not only important to the event organizers, it is required: ORC championship rules state that the number of competitors plus countries must be at a minimum of 14 for each class to confer a World title to the winner.

With an impressive surge of 12 entries from 4 countries, Class A has met this requirement already, helped in part by Tilmar Hansen’s TP 52 Outsider from Kieler YC in Germany. This boat was brand new to Hansen at the last combined ORC/IRC Worlds in The Hague in 2018, where he finished as runner-up to Karl Kwok’s Gold medal-winning TP 52 Beau Geste from Hong Kong.

“We are very much looking forward to coming to Newport next summer,” said Hansen. “The town is wonderful, the racing is always good, all the infrastructure is there, and we enjoy the great hospitality of the New York YC. Our plan is to race the RORC’s Caribbean 600 in Antigua in February, then ship the boat to race in Newport all summer in preparation for the Worlds.” Being near the top of this class in rated speed, Outsider will have some strong competition in a brand-new Fox, Victor Wild’s Botin 52 being built now, and Vesper, David Team’s (no relation to Robin) competitive TP 52 from southern California.

Another interesting development is the three IC37’s that have entered into Class B. This boat, created for one-design racing by the New York Yacht Club, has recently had some success under IRC, including an overall win in the Hamble Winter Series on the Solent. Another full season of one-design racing and, perhaps, some optimization for handicap competition could well make one or more of these IC37s a formidable competitor next fall. So far ten teams have entered Class B.

And Class C is also shaping up well with six teams from three countries, including Kevin Brown’s Farr 30 Notorious from Toronto and the Royal Canadian YC. His plan has been to do some IRC and ORC racing in Florida in the SORC offshore series this winter, and says his boat “is in top form, getting ready for the Worlds now.”

In preparation for the Worlds the IC37’s will hone their skills during a full schedule of one-design competition over the next several months, and for the others there are plenty of opportunities to enjoy sailing in Newport and prepare for the big show. The 166th Annual Regatta – North America’s oldest annual sailing competition – and the 12th edition of Race Week at Newport presented by Rolex will provide a useful preview in both racing formats and use of the same scoring system that has been recently confirmed for the world championship.

Outside, Teamwork and Notorious all plan to enter one or more of these pre-Worlds events.

“It’s really encouraging to see early entries from outside New England and across the Atlantic Ocean,” said event chair Patricia Young, who will be racing her Tripp 41 Entropy in Class B. “The previous ORC/IRC World Championship, in The Hague in 2018, set a high bar in terms of entries and while we’re not sure we can reach that level – Europe remains the epicenter for both of these rating rules – we are that much more confident we’ll have a very strong and diverse fleet of yachts for the regatta.”

While this big boat handicap championship has been a staple of World Sailing’s regatta slate for many years, the concept of scoring it with two rules is quite new, having only been done once previously, in 2018 in The Hague. The scoring formula is a little more complex, but the end result is a competition that does a more consistent job of rewarding the best-prepared and most-talented teams regardless of the wind conditions.

“The system we agreed to we think will minimize differences in the two rule systems,” says ORC Chief Measurer Zoran Grubisa, who with Jason Smithwick from IRC is co-chairing the event’s Technical Committee. “We have tested this and believe this will be an improvement on what we did in The Hague in 2018.”

The basic mechanics of the scoring scheme are fairly straightforward. ORC Results will be calculated using the Coastal / Long Distance Time on Time scoring model, while inshore races will be scored using Performance Curve Scoring (PCS) with a Constructed course. IRC Results will be calculated as Time on Time using IRC TCC. Corrected times calculated for ORC and IRC will be shown as deltas to the winning boat where the winning boat in each rating system will have a corrected time of “00:00:00” and all others will have corrected time calculated as the difference in time to the winner.

Finally, a single corrected time to determine the finishing place is calculated as the average of the boat’s corrected times in ORC and IRC.

Amendment 1 to the NOR can be found here. 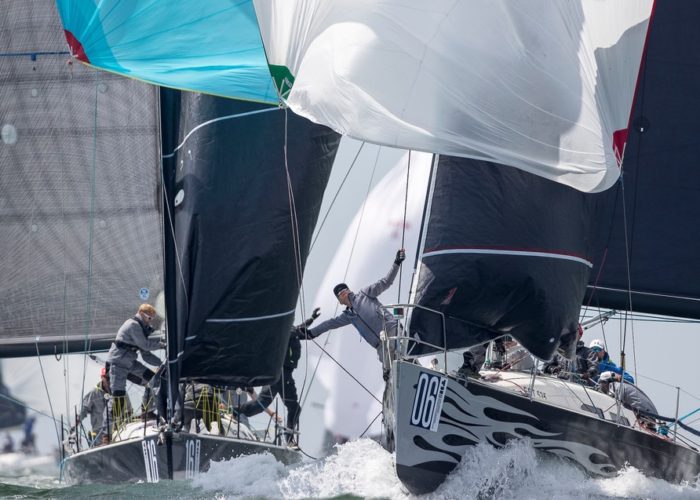