The seventh edition of the IRC European Championship will take place over Thursday to Sunday (25-28 August) in the Netherlands, as part of Damen Breskens Sailing Weekend.

39 yachts are entered, ranging from François Goubau’s Belgian Beneteau First 47.7 Moana to Alain Rousseau’s Dehler 29 Picsou. The fleet is divided into three classes: IRC One (TCC 1.050+), IRC Two (TCC 1.000-1.050) and IRC Three (TCC 0.900 to 1.000). To ensure accuracy of the rating and fairness of the competition, entries must have an Endorsed IRC certificate. The event aims to promote diversity, with one extra crew permitted in addition to the number stated on a yacht’s IRC certificate, if at least two females or two youth (up to 25-years-old) sail on board.

There are strong entries in all three classes, but the big names are in IRC One. Among them are two Moanas. In addition to the Goubou family’s, there is Dutchman Frans van Cappelle’s J/122 E Grand Prix. Both will be tough competitors. The Belgian boat comes fresh from a second class win at Cowes Week and the Goubou family (François’s wife and three sons race on board) are very familiar with Damen Breskens Sailing Weekend which they regularly enter. This time because of the IRC Europeans, says François: “it is something special – there are more boats competing and it is four days.” Of what to expect, he adds: “First of all it is at the end of the river Scheldt so there are some currents there which are difficult. But the organisation is perfect every year. They do a very good job.”

Goubau is a big fan of IRC: “IRC is a very good rule. Every rule there are some negative and positive points, but until now it is the best we have and it is simple. This is not the Olympic Games!”

If the Breskens-based Vroons are Dutch yacht racing’s best-known family, de Graafs are close behind with their series of Baraka GPs culminating in their present Ker 43. Father Herman, now 72, is on board while his sons drive the team with Dirk trimming main and younger brother Olivier steering, while mother driving the RIB and generally organises them. Baraka GP is based in Hamble and they typically race on the Solent in the new Grand Prix Zero class.

“Our main focus this year has been on this event – we will have our game face on for the four days!” admits Dirk. “We had to start form zero. This year we decided to do less offshore and focus on the inshores to get to know the boat better. We’ve done a lot of boat work, but a good search on proper crew. We have done a lot of training on speed and handling and sailing in the Grand Prix Zero class has helped us.” They are of course very familiar with all the 40 footers competing this week, especially other Solent regulars such as RORC Commodore James Neville’s HH42 Ino XXX, Rob Bottomley’s MAT12 Sailplane and Van Uden – ROST skippered by Gerd-Jan Poortman and a crew of young Dutch talent from the Rotterdam Offshore Sailing Team.

Another favourite in IRC One will be the First 40 Elke of Frans Rodenburg, which comes to the event in the unique position of having won her class previously at an IRC European Championship when it was held in Cowes in 2018. “We didn’t do a lot of events this year due to my schedule, but this has been our main goal for the year,” says Rodenburg.

Rodenburg usually competes at Damen Bresken Sailing Weekend. “It is really nice water – out on the open sea and there is a lot of tactical sailing because of the different currents in the deep and shallow water between the channels.”

In IRC Two there will be several races-within-a-race such as between the four J/109s. From the UK is John Smart and his international crew (Brazil, Germany, Armenia, France and the Netherlands) on Jukebox. They competed at this year’s UK IRC Nationals, finishing second to Adam Gosling’s Yes!

“It looks like it will be a very good competition for us because there is our nemesis Joule (Arjen van Leeuwen’s J/109) who have sailed over from the Netherlands for the J/Cup and Cowes Week. They smashed both of those, although we did get closer to them at Cowes Week. We haven’t yet raced them under IRC. It is looking like favourable conditions for the J/109 with light to moderate winds.” This is the first time Smart has raced his boat overseas which he says “increases the enthusiasm. We have been working up to this throughout the year. It is nice it is at the end of August and not the beginning of May…”

In IRC Three Kees Keetels’ A31 CSI Rakker and the X-362 Sport Extra Djinn of Michel Dorsman are considered the boats to watch.

Racing at the IRC European Championship will take place over four races. On one there will be a medium length coastal race of around five hours duration. On the rest there will be up to three races comprising two windward-leewards and one round the cans.

The forecast shows light to moderate conditions for all four days with the wind starting in the northwest and slowly veering into the northeast by Sunday – not the prevailing wind conditions, but good for the waves, advises PRO Menno Vercouteren. “The forecast is perfect. For the current here you need this kind of wind. On the medium coastal, we may see 2.5-3 knots of current – almost like the Solent.”

Further information is available on the event website: https://www.breskenssailing.nl/ 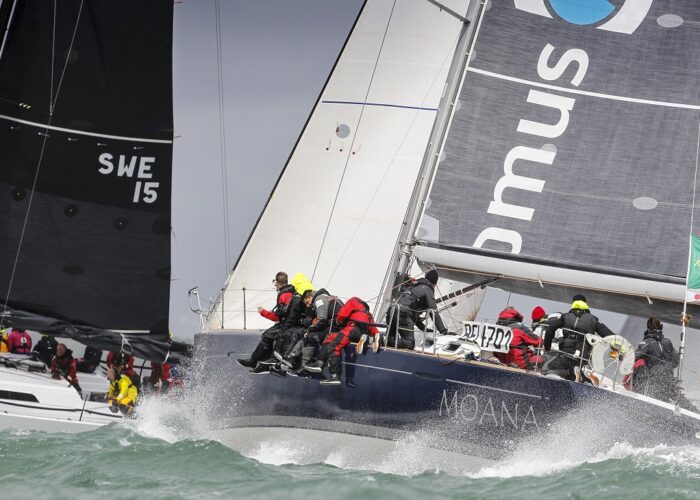