IRC pleases all at the Maxi Yacht Rolex Cup

The Maxi Yacht Rolex Cup once again proved that the RORC/UNCL’s IRC rating system is thriving at one of the most prestigious events in the sailing calendar. This year’s event, organised by the Yacht Club Costa Smeralda in conjunction with the International Maxi Association, saw a return to a pre-pandemic fleet size with 37 boats competing under IRC across five classes. The longest – the four J Class yachts, Velsheda, Topaz, Ranger and Svea – raced under their own rule.

Among the IRC fleet was Roberto Lacorte’s 60ft FlyingNikka, the first ever flying maxi, based on AC75 technology, with flip-up T-foils to port and starboard and a single rudder with an adjustable elevator. The Maxi Yacht Rolex Cup was the first event she has entered so to protect the fleet, she was given a conservative IRC TCC of 3.866, comfortably surpassing the previous record TCC – the ClubSwan 125 Skorpios’ 2.149. FlyingNikka also sailed alone in Mini Maxi 0, starting last and sailing up through the fleet.

FlyingNikka is already performing well and will readily foil upwind, but the team remains on a steep learning curve with manoeuvres, light wind take-off speeds, sailing in displacement mode, etc. “At the moment we do not have much data to review Flying Nikka’s relative performance following the Maxi Yacht Rolex Cup,” says Dr Jason Smithwick, Director of the RORC Rating Office. “She suffered some breakage and conditions weren’t ideal with largely windward-leeward coastal races that involved much short tacking up Bomb Alley. Her initial rating we calculated on the basis she would mostly go out in fully foiling conditions, but watching her sailing we have seen there were regular foiling transition points. On that basis using the VPP data in the transition range, and updating our algorithm for full foilers, we have calculated a new rating that we will issue to the team once they get the boat out on the water again.”

As usual IRC performed well across the fleet despite a range of conditions, from light winds at the start to 20+ knots on the Friday. This produced tight racing and varied winners, supporting further the benefit of a single number rating system.

In the largest class – the 13-strong Maxi (LH: 24.09-30.50m) across five races there were four winners ranging from the lowest rated, Massimiliano Florio’s Southern Wind 82 Grande Orazio to one of the highest, David M. Leuschen’s Wallycento Galateia. In her first ever race, Pier Luigi Loro Piana’s brand new ClubSwan 80 My Song, fitted with a canting keel and a single tack-able lifting daggerboard, scored her first bullet. However the outright victor was Lord Irvine Laidlaw’s Reichel/Pugh 82 Highland Fling XI.

It was also supremely close in Mini Maxi 2 where Alessandro Del Bono’s Reichel/Pugh 78 Capricorno defended her title, just a point ahead of Luciano Gandini’s Mylius 80 FD Twin Soul B followed by Sven Wackerhagen’s Wally 80 Rose and Jean-Pierre Barjon’s new Botin 65 Spirit of Lorina. This mix again demonstrated how well a simple single number rating system, based on superior maths with 40 years of refinement behind it, creates a level playing field, even between yachts of differing types, sizes and ages. For example built in 2009, Highland Fling XI is a relatively lightweight ‘modern’ design, whereas Capricorno is from a different era – launched in 1995 as an IMS-based ILC maxi. The former has a full hull shape with a 6.1m beam while Capricorno is 5.44m wide, but both are extremely well prepared and very well sailed by their highly experienced crews.

While the class splits threw up some anomalies, these were mostly due to the 24.09m length division separating the Mini Maxi and Maxi classes. This is to be dispensed with, IMA Secretary General Andrew McIrvine explains: “One of the IMA’s trickiest jobs is determining class splits in the fairest way. The tradition of using hull length is now obsolete as it is possible to have a modern high performance 60 footer with similar performance to an older more cruising-orientated 100. Similarly terms like ‘racer’, ‘racer/cruiser’, ‘cruiser/racer’ are highly subjective, so we have dispensed with those. We now intend to determine class splits using IRC TCCs alone to permit the fairest racing in the future.” 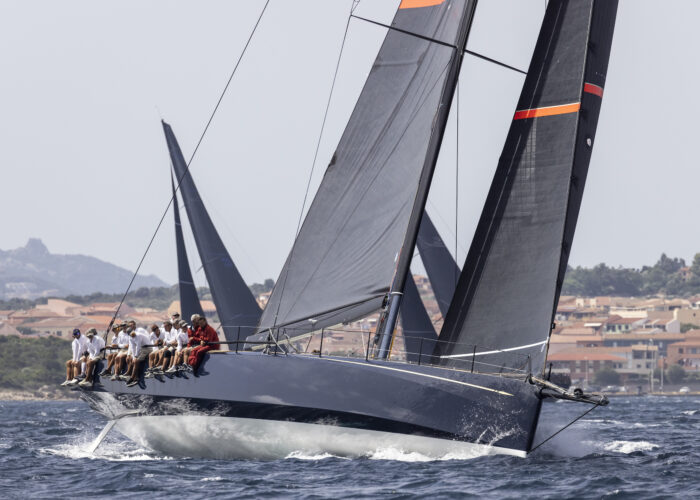